With the end of the year fast approaching I thought it would be a perfect time to reflect on what I published on the DM’s Guild this year. 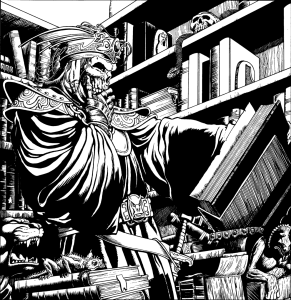 At the start of 2018, I set a goal to publish a series of 5e D&D encounters on the DM’s Guild. I’m happy to say that I somehow managed to keep to my schedule and get a three-part side-trek encounter series finished. In June I wrote a short post on my sales at that time (A Fey’s Anger Sales Report). Here’s an update of where they are along with the release date for each publication:

A Fey’s Anger, A Fey’s Evil and A Fey’s Lair were each initially released with a fixed price of $1. It took some time for me to decide on this price. Each of my publications covered only one or two encounters, which was smaller than a typical Adventurer’s League offering, so I felt my publications should be at the lower end of the market.

However, I consciously wanted to provide extra material in my writing that could be useful for DM’s who were crafting their own home campaigns. To that end, I included extra content beyond the encounter itself – NPC backstories, new magic items, new monster stat blocks – which expand the page count to twenty pages, which is larger than one might expect for a typical DM’s Guild publication that covered only an encounter.

Note that if I were to rewrite these offerings now, I’d make a few structural changes and edit some of the content down. However, I do believe the extra content I added provides good value for purchasers of these productions. ((addendum, check out a review from Merric Blackman where he commented on the size of my first publication))

It appears that the DM’s Guild market values work at roughly $0.10/pg as suggested in a recent twitter post by R.P. Davis. This would translate into a $2 price for each my offerings. As they were my first publications and they each provide only one to two hrs of game play, I decided that an initial $1 price was appropriate.

With the release of A Fey’s Lair, I changed the first two releases to be Pay-What-You-Want, with a suggested price of $0.50. I wanted to make it as easy as possible for purchasers of the new release to get the full story-line encompassed by my three sidetrek adventures.

Since making that change, the total downloads for these products increased significantly, averaging 2 or 3 downloads a week. Paid downloads averaged around 1 for every 4 or 5 downloads.  The actual paid sale rate hasn’t changed much since the change as I’m averaging between 0.5 to 0.8 paid purchase per week. Note however with my small purchase volumes, a small blip in sales can dramatically shift those numbers.

At the end of November I decided to adjust the suggested PWYW price for A Fey’s Evil up to $1.00 and set a new higher fixed price of $1.25 for A Fey’s Lair. I kept a Fey’s Anger at a suggested price of $0.50 as its a smaller product, covering a single encounter, compared to two encounters in the later publications.

I agree with a number of recent posts I’ve seen suggesting that items are generally under priced on the DM’s Guild. DungeonCommandr recently posted a great twitter thread on this very subject.

My products have been available during at least two DM’s guild sales. During each of these, I didn’t see any significant affect on the number of purchases of my products. I’m not surprised by this because,

By far the biggest impact on my sales numbers has been the release of a new product. Each publication I’ve released has resulted in a spike in sales for my other products. As new buyers become aware of my offerings, it’s not surprising that a few may want to see what other products I have available.

At the end of 2018 I was lucky to participate in a pair of collaborative efforts.

The first collaboration was with Jeff C. Stevens Villains & Lairs. I wrote a description of Kalzok the minotaur pirate for his initial release. Later, this was expanded to describe a full lair when Villains & Lairs reached the Electrum Sales milestone.

In early December my second collaboration, an article titled “The Influence of Droaam”, was included in Khyber Khronicle – Volume 4. This is a monthly magazine that started in 2018 where each issue includes Eberron content around some theme. Although the product is focuses on Eberron ideas, most of the content is easily translated to any campaign setting. My new new rogue archetype, The Thug, that is included with the Influence of Droaam article is a great example.

Thug: Where many rogues focus on deception and guile, you are not one of them. You reinforce verbal threats with acts of violence. You excel at inciting fear in those who oppose you. You know the best way to strike with a club and mace, and you’ve discovered that the application of pain is an effective motivator when dealing with uncooperative individuals.

Looking back at 2018, I’m happy to see what I’ve accomplished. I achieved my goal of completing a side-trek encounter series and was ecstatic  collaborate with other creators on the DM’s Guild.

Looking forward to next year, I’ve already committed to another pair of collaborative efforts. I’m going to be submitting a few articles for upcoming editions of the Khyber Khronicle, and I hope to again participate in an upcoming Jeff Stevens compilation.

I have started sketching the outlines of a few short adventures I plan to complete during the year. I’m particularly interested the possibility of creating a larger adventure as a collaboration with a few DM’s Guild authors in the coming year. Crossing-my-fingers I’ll be able to make it happen!

If you’re interested in reading a bit more on DM’s guild sales and pricing, check out the posts by the following:

The classic image by Terry Dykstra from 2E’s Monster Mythology of a lich contemplating arcane writings,  seemed a great fit for looking back on my publications for 2018.

About the scheming dm

This site uses Akismet to reduce spam. Learn how your comment data is processed.